One of the great things about the ebook revolution is that titles long out of print become available for a whole new group of readers who might only recently have discovered you.

I was one of a group of authors whose work was released in the first wave of digital backlist for Harlequin - they put out a couple of dozen in 2010 - and I'm going to be featuring some of them over the next few weeks, starting with two that won awards.

First up is the book that won my second RITA, The Marriage Miracle from Harlequin

And with that, he leaned down, slid his hands under her arms, then, when startled, she just sat there looking up at him, he said, ‘This would be much so easier if you would put your arms around my neck.’


‘Trust me, Matty,’ he said, but perhaps deciding that was one appeal too far, he didn’t hang around for an argument. ‘I know what I’m doing.’ And he lifted her clear of the chair.


Her arms — not taking one bit of notice of her “whats” and “don’ts” — took the sensible course and flung themselves around his neck and before she knew it, she was vertical, upright, Sebastian’s arms holding her safe against his chest. And for a heartbeat, she was any girl in any man’s arms.


The words to tell him what it was, exactly, that he couldn’t, she shouldn’t do, failed her and, very softly, he said, ‘We can do anything we want, Matty.’ Then, ‘It’s not so bad, is it?’


His breath was warm on her cheek, his face just inches from her own.


Oh, this was bad. About as bad as it could be.


His hand at her waist was pressing her close to him so that there was nothing but thin silk and soft cotton between her skin and his. Her imagination instantly filled the gap, her breasts engorging, her nipples tightening as feminine instincts as old as time urged her to go for broke and kiss him, caress him, draw him to her and never let him go.


So much for all her good intentions. 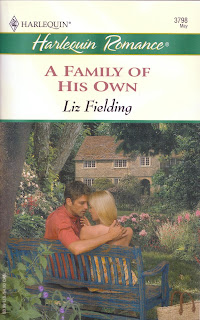 The second book I'm featuring, is A Family of His Own again from Harlequin
This was also nominated for a RITA, but here's the list of the prizes it did take.

This time the silence seemed endless and she had no words to fill it. Dominic Ravenscar did it for her. ‘What happened to Polly’s father?’


The abrupt change of subject threw her and she responded to this unexpected jab at a raw nerve in much the same way as he had. Instinctively. Defensively.


‘Polly never had a father.’


Her only excuse was that it had been a long time since anyone had asked her that question. Maybe, like him, she had erected some kind of warning signal over her own emotional no-go area. Or perhaps she’d blotted it out so thoroughly that she’d stopped noticing the way people tiptoed around the subject.  Whatever it was, she just wasn’t prepared.


Ashamed of her instinctive reaction, her need to protect her own feelings, she tried again. ‘I … That is, he…’


It wasn’t usually this much of a problem. But then her standard answer – “He was young – he needed to find himself. He’s still looking …” -- was calculated to make people laugh, give her an opportunity to change the subject. What was that she’d said about there being more than one way to run?

Links to both of them at the Harlequin site are in the intros, but they are both available to download from Barnes & Noble, iTunes and of course, Amazon

I've added the direct Amazon links, because my own attempt to find them on the site was a #fail