It's been a few weeks since I've played Six Sentence Sunday so this week I thought I'd share a few lines from my eBook, WILD FIRE. This is the third of the Beaumont Brides trilogy - you can download the first book, WILD JUSTICE, for free. 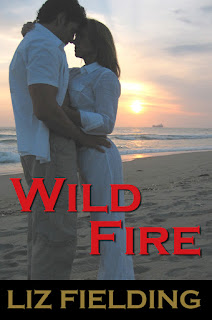 It's Melanie Brett Beaumont's story and, having been caught up in the dramas of her new family for the last few months, she is desperate to reclaim her sense of identity. More, to re-invent herself. She is being blocked at every turn: -

Swept along on a tide of blistering rage, her angry momentum carried her through the heavy glass door of the travel agent's office with such speed that the man approaching it from the other side was forced to step back sharply to escape the abrupt and painful rearrangement of his profile. And still she was oblivious to her surroundings until, on a reflex honed by an acute sense of self-preservation, the man grabbed her shoulders to prevent her from cannoning into him.


'Hey, there! Slow down.' The abrupt jolt almost stunned her, so deep had she been in her fury, so intent in her purpose. Melanie had never been so angry, had no idea that it was possible to feel that way and she raised her hand to her forehead, dazed by the suddenness with which she had been wrenched out of her temper.

Enjoy your Sunday!
Posted by Liz Fielding at 2:26 PM

So many books...so little time.

Lots of passion there--a dangerous amount of rage, suspense about why, what will happen, who stopped her and why!

I'm intrigued about what's made her so mad. Great six!

She's really angry, Lybne and when you're angry, you don't make good decisions!

There are a whole host of reasons, Paula - some krom the backstory in the first boon, Wild Justice (free to download) and then some other stuff gets added to the mix. She's in a dangerous mood. :)

Very in-the-moment snippet. I almost ducked out of the way, myself.

It takes a lot to get someone into that state, and I hope she gathers herself enough not to thump the guy she nearly beamed.
Powerful scene.

Intense! I too am curious to know what made her so mad!

Excellent description, it jolted me as well. :)

I literally cringed when he grabbed her shoulder. I was like, "Dude, you so don't want to do that. Seriously."

I felt as though I was right in the middle of that scene!! So intense! m

Heavens! Melanie's headline charge to the travel agency has certainly made an impression - and not just on Jack Wolfe!

Super! I felt my pulse increase when I read it.

Liz, I love that you have a couple of really long sentences, here! Gives us more of your gorgeous writing.utsio

Oops, sorry about those weird letters at the end...

Wow, lots of emotion packed into six sentences here! Wonder who or what got her so pissed off...and I hope she doesn't hurt the poor soul who jolted her out of it. lol! Great six!

Love the flow and rhythm of your voice. Great six!

Thanks so much, Silver. Hardly a "cute meet" but it certainly made an impression, as does the second, but in a totally different way. :)

I got your pulse racing! I love it, Elaine!

Hi Lilian - when I plucked that scene out for the Sunday Six I was amazed at the length of the sentences. It is all about rhythm, though, as Vivian says. It generates that headlong, not stopping for breath feeling in the reader.

At least that's the theory!

Not just one person, Sadie, but rather a combination of things that culminated in a "final straw", change your life, meeting.

Thanks so much for your comment, Vivien. The rhythm is so important.

This was very much a "headlong, not stopping for a breath" passage. I can almost see steam coming out of her ears. Great post, Liz.

Love the depth of her emotions!

Glad it all came across so well, Sharon. :)