There is something very special about a romance that revolves around the holiday season.


There’s something special about a Christmas romance that makes the heart ready to celebrate the holiday season.

I haven’t got a new one to offer you this year – moving house, etc, etc, etc… you’ve heard it all before, put a bit of a spanner in my productivity. But thanks to the wonders of the digital age, those I’ve written in the past few years are still available.

The first Christmas romance I wrote – All She Wants for Christmas - wasn’t meant to be a Christmas romance at all. Maddy, my heroine, after a very hard year building up a successful business, was calling time on anything to do with the holiday and chilling out in the West Indies with her father; the best laid plans…

It was originally given the title Trouble in Paradise, but there was a gap in the publishing schedule that December, the book was renamed and with a few fairy lights added to the beach scene cover it was a Christmas title.

Harlequin haven’t released it as an ebook yet, but it has recently been re-released in a large print library edition, so you can make a librarian’s day by asking her for it. It won’t cost you a penny.

Mistletoe and the Lost Stiletto is a true Cinderella story, with the heroine hiding out from the nasty tycoon with the elves. She is, of course, rescued by her own Prince Charming and the bad guy gets his just deserts. It has Santa (with flu), Rudolph (with a passion for cashew nuts) and snow angels. 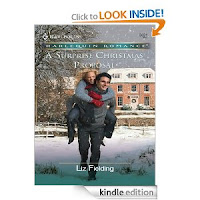 The heroine of A Surprise Christmas Proposal is Sophie Harrington, who’d done her duty as a secondary character in both City Girl in Training and The Billionaire Takes a Bride. Out of work and homeless, she was overdue for her own happy ending and if her Prince Charming wasn’t exactly charming, he made Sophie’s Christmas very special. This book is only available in paperback at the moment.


The final selection is a duet of books in which the heroines change places. The “princess” becomes the pauper in Christmas Angel for the Billionaire and the supermarket checkout girl becomes a "princess" for a week in Her Desert Dream

ebook, whichever you prefer). For a chance to win, tell me about something that happened to you at Christmas. Something wonderful, something ghastly, something magic...

I’ll post the winner on Friday (so make sure you tick the box to get follow up comments so that you don’t miss it).

My favorite! Well, all the themes seem to be favorite. But I love this time to arrive and have related books to read.
Thank you for the suggestions.
Happy Holidays!

Thanks, Teresa. I love the sense of anticipation at this time of year. Everything seems possible!

Something wonderful and magical was in 2004 my dad was serving in Iraq (he has since returned home in 2008 on a permanent basis after being injured) but he was told he would not be able to come home for Christmas but I got home from work on the afternoon a few days before Christmas and there he was sitting on the couch waiting for us,it was the most awesome thing ever to see his smiling face,and the best surprise ever I really did not see it coming !

I could only think of disastrous things that happened at first, like the Christmas my Nana chucked a sulk and wouldn't come and we spent the morning trying to persuade her then the rest of day feeling guilty for enjoying ourselves. So she got what she wanted ;-].
Then I remembered my mum decorated a dry tumble weed with tiny ornaments just for me when I was 5. It was so pretty and unusual but unfortunately our house burned down the following year and all the photos were lost.

That is such a wonderful story, Desere!

Fiona, that's the downside of Christmas. Expectations are high and tempers are short!

I absolutely love Christmas themed books, so it's perhaps fitting that my debut release is just that. Out just before Christmas itself, I can't think of a better present for myself :-D

Absolutely the perfect pressie, Aurelia! Do you want to come and tell us about it?

Just want to say I read Mistletoe and the Lost Stiletto last night and loved it! Thank you!

I'll draw a winner tomorrow - today was a gardening day. The standard roses are in!

We have a winner. Kelly - your name came out of the hat for copies of Christmas Angel for the Billionaire and Her Desert Dream. Can you email me at liz at lizfielding dot com with your details and whether you'd like paper or digital editions.

Thanks everyone for sharing your stories. Do come back next week, when you'll be able to download an Amazon freebie copy of Old Desires.

And this week, when we've got the fabulous Kate Hardy and mates talking about their Christmas anthology!

Thank you very much! I'm so excited - I never win anything!