I've been asked about secondary characters in my Rita nominated book, The Sheikh's Convenient Princess.

Does Violet have her own story? Do the Garland Girls appear in other books?

Happily, the answer is yes and yes.

I created the Garland Agency for the book Dating Her Boss.

When Jilly Prescott arrives from London clutching her certificates for incredible typing and shorthand speeds, Amanda Garland is torn.

Garland Girls are the creme de la creme of secretarial/PA staff and Jilly doesn't have their finishing school gloss or style but she is desperate. Her brother needs help, but he's grown suspicious of her efforts to tempt him out of a very dark place by sending him her most attractive temps. Jilly, with her uncontrollable mop of hair and a Geordie accent that elocution lessons have not been able to entirely eradicate, will at least deal with his immediate need for secretarial help.

Jilly, who has arrived in London to catch up with her childhood sweetheart, only to have her dreams smashed, touches Max's grieving heart and he sets out to help her be noticed in her friend's glamorous new world.

Amanda Garland has her own story. Self-sufficient, successful, independent but with love all around her, her biological alarm clocks goes off and she decides it's time for a baby. She is highly organised, independent and doesn't need a man - she's going to use a donor clinic to achieve her dream. That's until she meets car hire chauffeur Daniel Redford and The Baby Plan begins to unravel.

Having created the Garland Agency, whenever I need a competent woman to take charge of a difficult situation, that is - like it's very happy clients - where I always go, so the name does crop up in other books.

Finally, there is Princess Violet, English wife of Sheikh Hamad, who is determined to give Ruby and Bram a wedding that, while private, will be unforgettable.

Descended from a runaway princess who took with her the legendary gold and ruby encrusted dagger, the Blood of Tariq, I wrote Violet's story, Chosen As the Sheikh's Wife  as a special commission for the 100th anniversary of Mills and Boon.

It's a novella, but packed with action. A life-threatening situation, a marriage of convenience, a kidnapping and an attempted coup. And two lovely people falling in love. 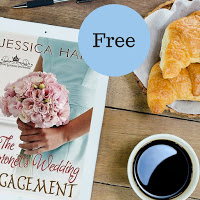 And while I'm here talking about linked characters - one of the books in the Invitation to a Royal Wedding series, The Baronet's Wedding Engagement, by Rita award winning Jessica Hart, is free at the moment.

Here are the links -