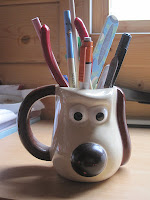 Here's Gromit, guarding my writing tools. I'm not entirely sure what the pliers are doing in there - maybe I can use them to extract an plot.

Just as the moment I'm sharpening the my writing pencil - okay, pen - for the start of a new book. While I write straight to my computer these days, I still feel the need for a notebook and a good pen when I'm brain storming. That way I can fly off in whatever direction I want, unconstrained by the "enter" key. A list just doesn't work in the same way as a plot spider.

After a couple of really difficult books, during which I was too distracted by outside goings on (ie, selling and moving house) to concentrate on plotting, I've decided that flying into the mist is just too much hard work and I need to plot like a grown up.

I've done it before. I had a plot when I wrote The Sheikh's Unsuitable Bride and that worked, brilliantly. And I had one when I wrote Reunited: Marriage in a Million, because I was writing it as a trilogy with Barbara Hannay and Jackie Braun and we were assigned an editor who had never worked with me before - and we all needed to know what was going on. I didn't stick very closely to my original plan, to be honest, but a plot is not a straightjacket, it's a  road. The department point is known, the destination is clear, but sometimes the satnav takes you on the scenic route.

It'll be fine. I've got the notebook. I've got the pen. All I need now, is an idea. A story idea - one that asks questions.
The more questions I ask, the more I can see their world.
Posted by Liz Fielding at 8:00 AM

Am writing with a plot for the first time EVER after reading Save the Cat of late. It's turning out to be one of the most fun, easy books I've writen in an age.

Timely blog post - just what I need as I re-think my novel and the protagonists' conflicts. I considered myself a pantser but with my novel in a bit of a muddle I think it's time to try planning a bit more and asking deeper questions of my characters. Good luck with the new novel. :-)

Thanks for reminding me to dig out Save the Cat, Ally!

Glad to jog the writing elbow, Alexandra. The more questions the better, I always find. And the "how can I make it worse for my characters" prompt is a good one. :)

I just love this quote:

“I've decided that flying into the mist is just too much hard work and I need to plot like a grown up.”

Can I quote you on my website? I love plotter and pantser quotes.

This is the right blog at the right time. It is almost November 1st, and I have no idea for a new book but I need to start one and NaNo is coming. I usually enter it and finish the 50,000 words about 50% of the time. I can tell by your questions that you think ‘writing’. I think ‘marketing’ – what can I build into the story to make it sell more copies.

1. the setting? Can I locate the story where it will have high interest? How about Stonehenge? How many people have been there and how many would like to go there? Perhaps Bath would be better if the story involves the Roman ruins.

2. the careers? What very interesting careers can I give the hero or heroine or both? Something to do with the location?

4. Go straight to the ending first. What great ending can I come up with that will have readers standing up to cheer and eager to buy my next book or any book from my backlist? What would I have to do to make this great ending come true? Like Rome, all roads should lead to this ending.

5. What moral premise would have a universal appeal? How can I make this individual instantiation of a story reflect a universal truth? Can there be a second ‘initiation’ story later in life?

6. What story line would inherently offer the most opportunities to reward the reader for reading on a page by page basis?

7. How do I structure the plot so that there are highly sympathetic secondary characters that readers will absolutely demand to read their stories in future books.

Are potential miracles happening at Stonehenge? The heroine is a critic sent to debunk the miracles. The hero is an anthropologist who believes there is a power in places like Stonehenge and he wants to explain it.

Think like a marketer! Now I need to add these to your set of questions and see if I can come up with a NaNo idea in a few days.

Why couldn't I live near Stonehenge? I'm one of those people what wants to see it.

Thanks for all your great marketing pointers. Sadly, I don't see Stonehenge in my writing future. In general, editors hate anything to do with archeaology (or causes!) and the paranormal is discouraged in contemporary romance. I agree with you on great secondary characters - Matty in The Marriage Miracle was a secondary.

I worry about creating an ending before I start. Even when I've plotted a book the ending isn't necessarily what I imagined. I need the magic, the mystery, to keep me focussed.

My biggest seller recently had "baby" in the title and I'm not sure that really flies with the Riva/Kiss concept.

But you're right, Stonehenge is a big draw - maybe it's time to get my characters out of Maybridge and into the real (mystical) world!

On the "newsy" angle, Vince, our books are still being published twenty years on in some part of the world - the one thing you don't want to do is date them.

I once read an old romance where the heroine was wearing Crimplene (highly desirable for a while during my mother's generation) and the hero's kitchen was wonderfully modern in red formica - ditto. Reading it raised a grin, I confess, but it was a lesson well learned.

ONe of the things I love about reading vintage is that little glimpse into the past, two toned court shoes or a little pink suit with a peter pan collar. I can so visualise (usually worn by Audrey Hepburn or similar). But it takes a long time for those things to be charming rather than dating. But I don't like it when current affairs are mentioned so much because that takes me out of the story without giving me a buzz and a pretty image of the heroine or her surrounds.
Am doing Nano this month and trialling Scrivener which is making me plot. I'm usually a pantser, holding the heroine and hero in my head with a conflict and just going for it.

Liz and Vince, Stonehenge might not be the ideal place to set a romance but what about a spy novel? It's only a forty minute drive from where I live, so I can state with some authority that the area with its surrounding barrows has more moles than a Le Carre novel.
Maggi