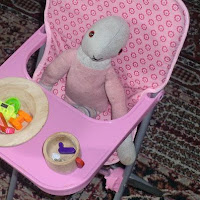 This is the story of a toy bunny. It was made for Cora Rose, my oldest granddaughter (she's two) by her very lovely cousin, Lucinda Ganderton.
Lucinda, a designer and creator of wonderful things (you can buy her books and make them yourself), upcycles stuff and Babbit was made from a cashmere cardigan that had a bad wash day and other odds and ends.

You'll notice that Babbit has no ears. They were "loved" off, but are safe in a drawer for the day when Cora's mummy has Babbit, needle and thread and time all in the same place. Or at least that was the plan. Grab hold of your Kleenex...

On an outing to Tesco in Purley, Babbit was lost.

Many phone calls to Tesco and the bus company ensued. Cora was distraught. She cried for hours. Mummy told her that Babbit had gone on holiday. Family members all over the world sent postcards from Babbit, telling her that he was having a lovely time. She still cried. Babbit might be having a good time but she wanted a cuddle! 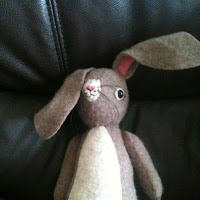 The lovely Lucinda rushed to the rescue. She couldn't make an identical Babbit - when you upcycle, your materials are what you have to hand and let's face it, you don't want too many cashmere cardigan disasters. But she found this Babbit in her workroom. She's  grown a little (just like Cora) and has a lovely tan from her holiday. 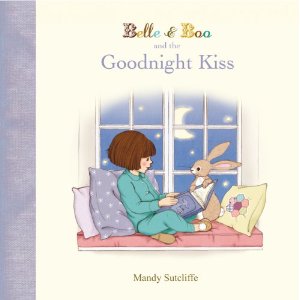 And the really magic thing about Babbit mark II is that she's in a book because Lucinda made her as the prototype for "Boo" in tbe Belle & Boo books by Mandy Sutcliffe (Cora and her mummy went to Waterstones and bought one). And here's the thing - Boo's friend Belle, looks very like Cora.

And the moral of this story? Never take your best loved toys to the supermarket. They may decide to take a holiday, and they don't all come home.

Since I wrote this I've received this picture of one very happy little girl:  Babbit I has made it home.  Now how to explain Babbit II ... a lovely cousin, perhaps? 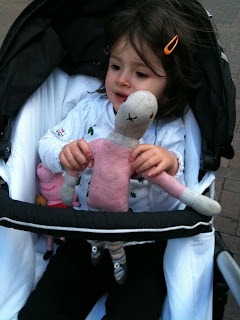 Ohhh naughty Babbit for going AWOL - glad he has returned from his holidays! Caroline x

Turns out that Cora was humouring her parents when she accepted Babbit II. When the lady at Tesco finally produced the real thing from a box full of lost children's clothes she just said "Babbit was lost in the shop, mama..." in that I-told-you-so way they have. His ears were sewn back on last night to celebrate his return.

Oh, I do love a happy ending! What a lovely post.