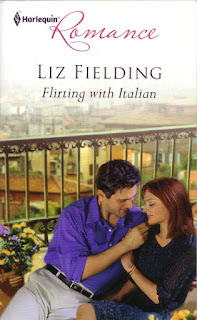 It's Sunday and, since we're getting close to the end of this year's Here Come the Grooms competition, I thought I'd choose my Six Sentence Sunday snippet from myown  hero's book, FLIRTING WITH ITALIAN.

Matteo di Serrone is many things. A botanist, wine maker, adviser to the United Nations, conte. His complex personality has been influenced by a childhood marred by the death of his father and the betrayal of two women who were important to him. He has two passions; the quality of his wine and the protection of his dysfunctional family. Sarah Gratton's arrival appears to threaten the latter and there meeting is fraught with tension that culminates in a kiss...

The world seemed to have slowed down and it took forever for his lips to reach hers.  Somewhere, deep inside her brain she knew the word “…no…” was teetering on the brink, ready to fall to her lips.  All she had to do was move them, say it, but her butter-soft mouth seemed to belong to someone else.

When it parted, it was not to protest and as his mouth found hers a tingle of something like recognition raced like wildfire through her blood, blotting out reason.  Her  and her body, with nothing to guide it, softened, melted against him, murmured, “Yes…”

It wasn’t enough and she clutched at his shoulders, fingers digging into hard flesh as she began to fall back, leaving gravity to take them down into the soft thick grass on the shady side of the wall.

If you'd like the chance to win a copy, along with books by Kate Walker and Anne McAllister, click HERE - we'll be drawing the winners on the Sadie Hawkins Day - 29th February!
Posted by Liz Fielding at 9:19 PM

Very nice writing, Liz. Sounds like a good read...
But have you realised you used the word soft three times? Or was that deliberate?

Oh, lord, Pat. This was taken from my own manuscript, might have been caught at copy edit stage. I'll have to check.

I loved the passion in this scene. Great six.

Your quote is the same as in the book. Just loved the book. (Is there still time to enter it in the RUBY contest? You are in the commonwealth, aren’t you?)

I had no problem with ‘soft’. In one case it is a compound adjective, then in the next case it is a verb, and in the third case it is referring to something different—the grass.

Also ‘soft’ is a common word which makes it much less noticeable. (I just read a book where the author used the term ‘broken voice’ which was fresh and interesting; however, she went on to use it four more times in short order and was that ever noticeable!)

I think the soft matches the ambiance. It seems like a very gentle moment.

Vince, do you mean the RWAus competition? I am a member, but I think their comp is only open to Aussie authors.

I has, however, shortlisted in the UK RoNA ROSE!

Hi Princess Fiona :) Thank you. It was a very special scene to write.

I think the R*UBY has the best looking award.

For just looks, it’s the writing award I’d like to win.

Alas, it is only for Australian or New Zealand writers. Besides, the deadline has passed. Since readers vote on the winners, it might be hard for an outsider to win anyway.

“The R*BY Award, affectionately known as The Ruby, is our premier award and the only one of its kind in Australia. Voted on by Australian readers, this contest is open each year to any Australian or New Zealand romance author who has published a long or short romance novel.
Entries close 3rd Feb, 2012.”

BTW: I just read, “The Cinderella Valentine” and I’m still smiling an hour later. It did present a few challenges.

2) While I’ve heard of TSTL heroines, I’ve never read a heroine actually say this herself!
Polly: "I’m too stupid to live, let alone be entrusted with a business.”
Did you write this for other authors to enjoy?

3) When the hero asks the heroine about her name, Polly, he says:

“What kind of name is that?”

“How can it be short for Mary? It’s longer.”

“I guess it’s one of those things you have to be British to understand.”

I have been wracking my brain over this and I think maybe since the Brits are so formal that an informal name like ‘Polly’ is actually shorter than a shorter name like Mary (the name of a queen.) But this is a pure guess.

”Three weeks of looks that had moved from cold to a sizzling heat. From tight smiles to tender ones. (And a hero who went from looking like the devil, to looking like Adonis.)

I think I learn more about writing, with more enjoyment, reading your stories than I do reading any other author. I’m sure glad I was made aware of “The Cinderella Valentine”.

Vince, you never fail to may be feel good!

Okay - a rusk is a big, hsrd, sweet biscuity thing that you give to babies and toddlers. They suck at it and the resulting mess will stick to carpets and clothes like glue.

Ms Kenning changed it to chocolate, because presumably she didn't know what it was, either, just as she didn't understand the use of Valentine in the title since it didn't involve Valetine's Day.

I'm not sure I consciously chose TSTL to amuse my fellow authors - you tend to pick up phrases and use them not realising they aren't in general use. I learned early on to try and slip in an explanation of anything that might not be obvious.

As for Polly, I should probably have said "pet" name for Mary. I wrote this very fast as a pre-launch on-line read for eHarlequin for the Brides of Bella Lucia continuity series (about the Valentine family) I finished the series with The Valentine Bride.

I don't know why Polly/Mary go together, but Molly is usually a diminutive for Catherine Mary.

And thanks for the ARC, comment - I'm glad it hit the spot

I'm busy reading the other books in my shortlist. I'm off to bed with the Dangerous Lord Darrington. :)

Blog is nice and Great!! Here I have found all the information for which I was looking for long time. Once you plan to relocate some random question start pumped up in your mind the very first one is to make sure you hire a reputable company that is able to do a good job for you.